Kinz Klips have a special clip to attach the toy pet to backpacks, zipper pulls or pushbikes. Canadian soft-toy manufacturer Ganz launched Kinz Klips in 2009. The collection of miniature plush animals was designed to complement the company’s existing range of popular Webkinz pets.

Each Kinz Klip weighs around an ounce and measures about 4 inches with its clip. Every toy comes with a secret code that allows the owner to unlock the Zums’ Sighting Area in Zumwhere in the Magical Forest on Ganz’s Webkinz website. 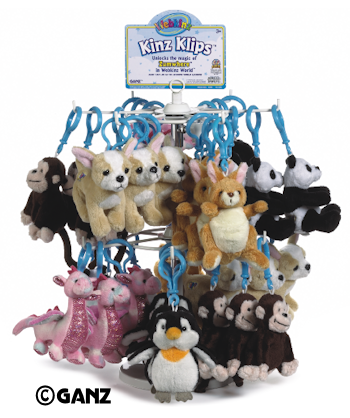 What are Kinz Klips?

Wow it has been an exciting past few weeks from Ganz as they have now announced that they are releasing a new Webkinz product called “Kinz Klips“. These Kinz Klips or Kinz Clips are basically a smaller versions of normal Webkinz toys and may be similar to the Webkinz Juniors soon to be released. These Kinz Klips will come with special clips which are attached to the top of their heads so they can be hooked onto things such as backpacks, school books, zipper pulls, or even your push bike so that they can enjoy the freedom you do. Ganz have not announced if they will have feature codes for these items but as soon as we know we will tell you. All we know for now is that these toys will have a code which will unlock the magic of Zumwhere in Webkinz World.

We have already been informed that there will be an original six different types of “Kinz Klips” including the webkinz Monkey, Kangaroo, Whimsy Dragon, Penguin, Panda, and Chihuahua. The “Kinz Klips”should be on sale for only $5 to $6 each so will be affordable to all and can be easily purchased with your spare pocket money.

When we announced that Ganz was releasing a new line of items called “Kinz Klips” we were able to tell you that the feature codes on these items would “unlock the magic of Zumwhere”, but at that time we weren’t able to tell you what “Zumwhere” was. Now we can.

“Zumwhere” is a new feature of the Magical Forest in Webkinz World. To visit Zumwhere, you must enter at least one Kinz Klip feature code on your account. This will unlock access to “mini-games” where you can search for “Zums”. The more feature codes you enter, the easier it is to find “Zums”. There is no word yet on exactly what a “Zum” is, but they will let you collect “Zummies” and virtual prizes. There are 48 different “Zums” to be found in the forest.