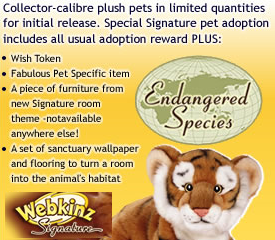 First there were Webkinz pets, then there were Lil Kinz pets. In April 2009 Ganz expanded the Webkinz line with the addition of “Signature” pets. In January 2010 Ganz announced a new line of Signature Pets. This new “Signature Endangered Species Collection” features similar styled plush pets and special virtual items attainable upon online adoption. When adopted, you are given a special piece of furniture specific to a Signature Endangered room theme in Webkinz World, a “Sanctuary Gift Pack” that includes exclusive flooring and wall paper, and a wish token.

Each Webkinz stuffed animal and Webkinz accessory comes with an 8-character code. By registering this code on the Webkinz website, you “adopt” this pet in the virtual Webkinz World. Without the Secret Code, the user may not get access to the Webkinz world. Toy animals that are missing tags are not supposed to be sold by retailers, and removal of the tags without purchasing the animal is considered shoplifting. If a user forgets a login name and password, they can always go back to the Secret Code to gain access. Without the Secret Code, a user cannot recover a lost account. Currently, accounts expire within one year, unless another Webkinz animal is purchased, and that animal added to the user account.

Once a Webkinz owner has adopted a pet online, a Webkinz owner is given a room, and some virtual furniture to decorate the room. Each virtual pet has its own sets of advantages and disadvantages, and must be fed using a special food item assigned to it.

Adopted pets have a happiness meter, a health meter, and a hunger meter. So in essence a Webkinz owner has to log on to the website regularly to play and entertain the pet. If the levels of any of the previously mentioned meters fall the pet takes ill and has to be taken to ‘Dr. Quacks’ for treatment, however taking the pet to Dr. Quacks usually costs Kinzcash.

Webkinz, a Ganz website offers you services such as online games featuring your favorite Webkinz pets, lets you take a virtual tour of the Webkinz, a Ganz website, gives you the online catalogue, which is different for different pets of your choice and the site also features trading cards through which you can trade points with other users and end up winning goodies and Kinzcash. The Kinzcash can then later be exchanged with goodies on offer on the website.

Ganz has now officially released a statement saying that there will no longer be anymore Webkinz Signature Endangered pets produced. These webkinz are expected to become extremely valuable through the coming years, so if you are one of the many who loved these pets but never got the chance to purchase one, then you better go to your nearest Webkinz retailer ASAP.