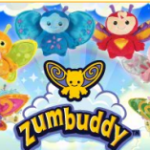 Zumbuddies and Zumbuddy Klips are plush toys sold by Webkinz. Zumbuddies are an imaginary animal created by GANZ; the plush toy is usually brightly colored has wings, two legs, two arms, and antennae. Zumbuddies and Zumbuddy Klips come with a code that allows you to unlock a virtual version of the animal on Webkinz. While the plush toy is called a Zumbuddy, the virtual pet is called a Zum. Zums live in Zumwhere, and if unlocked, can be accessed in the Magical Forest.

Each Webkinz stuffed animal and Webkinz accessory comes with an 8-character code. By registering this code on the Webkinz website, you “adopt” this pet in the virtual Webkinz World. Without the Secret Code, the user may not get access to the Webkinz world. Toy animals that are missing tags are not supposed to be sold by retailers, and removal of the tags without purchasing the animal is considered shoplifting. If a user forgets a login name and password, they can always go back to the Secret Code to gain access. Without the Secret Code, a user cannot recover a lost account. Currently, accounts expire within one year, unless another Webkinz animal is purchased, and that animal added to the user account.

Once a Webkinz owner has adopted a pet online, a Webkinz owner is given a room, and some virtual furniture to decorate the room. Each virtual pet has its own sets of advantages and disadvantages, and must be fed using a special food item assigned to it.

Adopted pets have a happiness meter, a health meter, and a hunger meter. So in essence a Webkinz owner has to log on to the website regularly to play and entertain the pet. If the levels of any of the previously mentioned meters fall the pet takes ill and has to be taken to ‘Dr. Quacks’ for treatment, however taking the pet to Dr. Quacks usually costs Kinzcash.

Webkinz, a Ganz website offers you services such as online games featuring your favorite Webkinz pets, lets you take a virtual tour of the Webkinz, a Ganz website, gives you the online catalogue, which is different for different pets of your choice and the site also features trading cards through which you can trade points with other users and end up winning goodies and Kinzcash. The Kinzcash can then later be exchanged with goodies on offer on the website.

On October 28th “Zumbuddies” were added to Webkinz World.

Players entering the feature code off of a Zumbuddy plushie receive a virtual Zumbuddy in Webkinz World. Zumbuddies fly, play, dance, eat, and even follow Webkinz into the Clubhouse. When two Zumbuddies get together on the same account, they play together and share toys.

A new “Z Shop” was added to Webkinz World as part of this new feature. Zumbuddy owners can buy items from this shop to make their Zumbuddies happy. Happy Zumbuddies reward their owners with Zummies that can be used to purchase prizes in the “Z Shop”.

When you adopt your Zumbuddy you unlock the Visit Zums feature in Zumwhere, for each zumbuddy you get a large room in Zumwhere for your Zumbuddy, and ten zummies of each color. After your fifth (the 6th, 7th, 8th and 9th) Zumbuddy you are awarded 15 zummies instead of a room. On your 10th, 15th, 20th, 25th…Zumbuddy adoption you will receive another room.

Remember these numbers only represent the chance odds of earning zummies, there is no guarantee that zummies will be awarded. When you have gotten zummies, two zummies will appear above one of your Zumbuddy’s heads showing the color and number of zummies that were awarded.

The Zumbuddies always randomly award two colors of zummies totaling those numbers. Also note that these zummies are different from the Zumwhere red, yellow, green and blue zummies. They are light blue, purple, yellow and pink. They can be used in the “Z-shop” to purchase furniture and decorations (which go in your zumbuddy’s room) or prizes to use in your Webkinz World rooms! Unlike the prizes that are purchased with zummies from the Zum Catalog, these prizes cannot be traded or sent via Kinz Post.